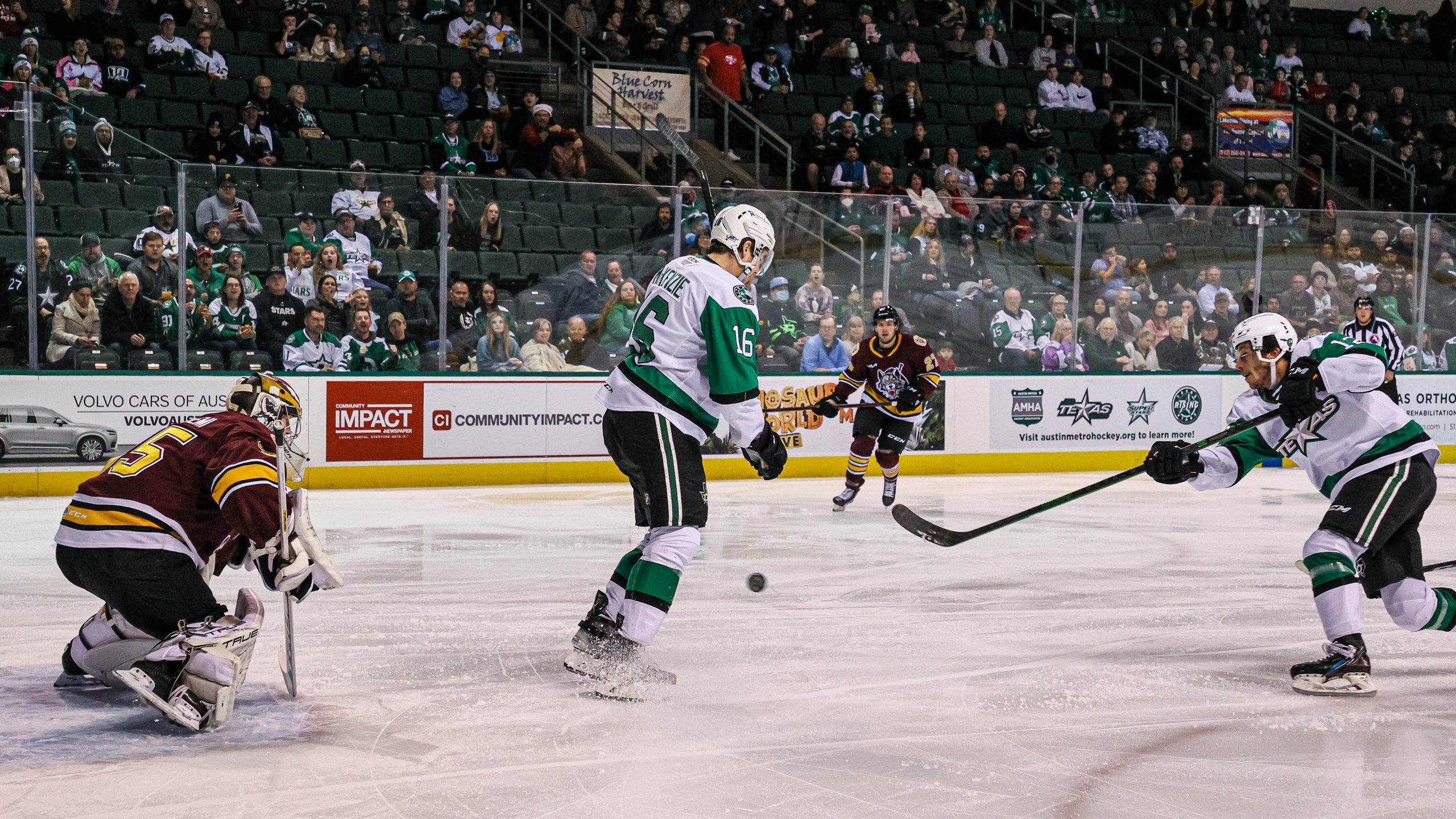 CEDAR PARK, Texas – The Stars returned home from their four-game Canadian road trip Thursday night to square off with the red-hot Chicago Wolves. Also returning was veteran netminder Ben Bishop, who played his first game since the 2020 Stanley Cup Playoffs.

With Chicago looking to extend their winning streak to seven games and the Stars hoping to get back on track, there was no doubt this was going to be fun. This contest lived up to the hype. A Texas-sized shootout saw the Wolves launch a barrage of shots into the net en route to an 8-4 victory.

It took no time for the lamp to light up with the Wolves’ C.J. Smith scoring just 33 seconds into the game. Adding insult to injury, the Stars were on the penalty kill less than a minute later. During the kill, Josh Melnick scored his second short-handed goal at the H-E-B Center this season to level the score.

Less than 20 seconds after the Melnick short-handed goal, Andrew Poturalski scored his 10th of the season to retake the lead. Not even a minute later, Riley Damiani came right back and tied it back up. There were already four goals scored on just six shots, not four minutes into this game.

Luckily, the fans got a short reprieve before the fifth goal was netted at 6:16 by Jack Drury to put Chicago back on top. An absolutely chaotic start to this game created by a fantastic display of open skating and superb skill led us to the most intense period of Stars hockey this season. With the Stars still hunting for their third equalizer, Anthony Louis came up big and buried his sixth goal of the season.

After an absolutely wild first 20 minutes, the expectation was that both teams would tighten up defensively and fight for the game-winner. But, sadly, whatever adjustments were made in the Stars’ dressing room during the first intermission were quickly thwarted by Smith, who took only 24 seconds to score his second of the game.

Continuing the trend from the first period, the second remained a wide-open, highly skilled affair, with both teams showcasing their dynamism on the rush. Midway through the second period, the Stars took to the power play looking to tie the game for the fourth time.

Exactly one minute into the power play, it’s Ty Dellandrea with a wicked wrister from the slot. Sadly the tension in this game quickly dissipated, with the Wolves retaking the lead again just a minute later. This time it was Josh Leivo getting his first on the night.

Less than two minutes later, Joey Keane extended the Wolves’ lead to 6-4. As the remaining time in the period was salted away, this game began to tilt heavily in favor of the Wolves, whose top-end skill overwhelmed the Stars’ defensive structure. Prior to the end of the second period, C.J. Smith capped off the hat trick and extended the lead to three.

The final 20 were quite different from the previous 40. Despite the Stars’ best efforts, they could not cut into the Wolves’ lead at all.

Instead, Leivo would put the final nail in the coffin late in the period with his second goal of the night. A terrific game for Smith with his hat trick and perhaps an even better performance from Leivo, who had two goals and three assists.

In addition, an honorable mention to Louis, who has turned up the scoring after a slow start with a three-point night.

This was not the warm welcome home for the holidays the Stars expected. Despite an emotional return to Austin for Bishop, the Stars were unable to force their game tonight. Instead, they were forced into a high-speed shootout with a team that has plenty of NHL-caliber firepower.

The Stars had difficulty clogging passing lanes and clearing space in front of the net. While there were mistakes all around, several of the goals given up Thursday were not seen by Bishop due to congestion in the slot. Going into their next matchup, it will be important for the Stars to embrace a more physical game and one that looks to slow the pace of play.

The Stars are great in a low-scoring, highly physical contest. Unfortunately, there is a significant struggle in playing any other way. The lack of adaptability hurts, but failing to establish the kind of game that benefits the team’s playstyle is becoming a concern. However, the season is still young, and there is plenty of time to correct these issues.

Bishop’s return signals a change in the organization’s goalie depth chart. Most likely, Jake Oettinger will find himself back in Austin for most of the season when Bishop is called up to
Dallas.

Of course, Thursday night’s result is not the most encouraging sign for Bishop, but this is his first game in roughly 16 months. He will likely get the nod in each of the two remaining games against Chicago, where he will have the chance to right the ship and get back on track.