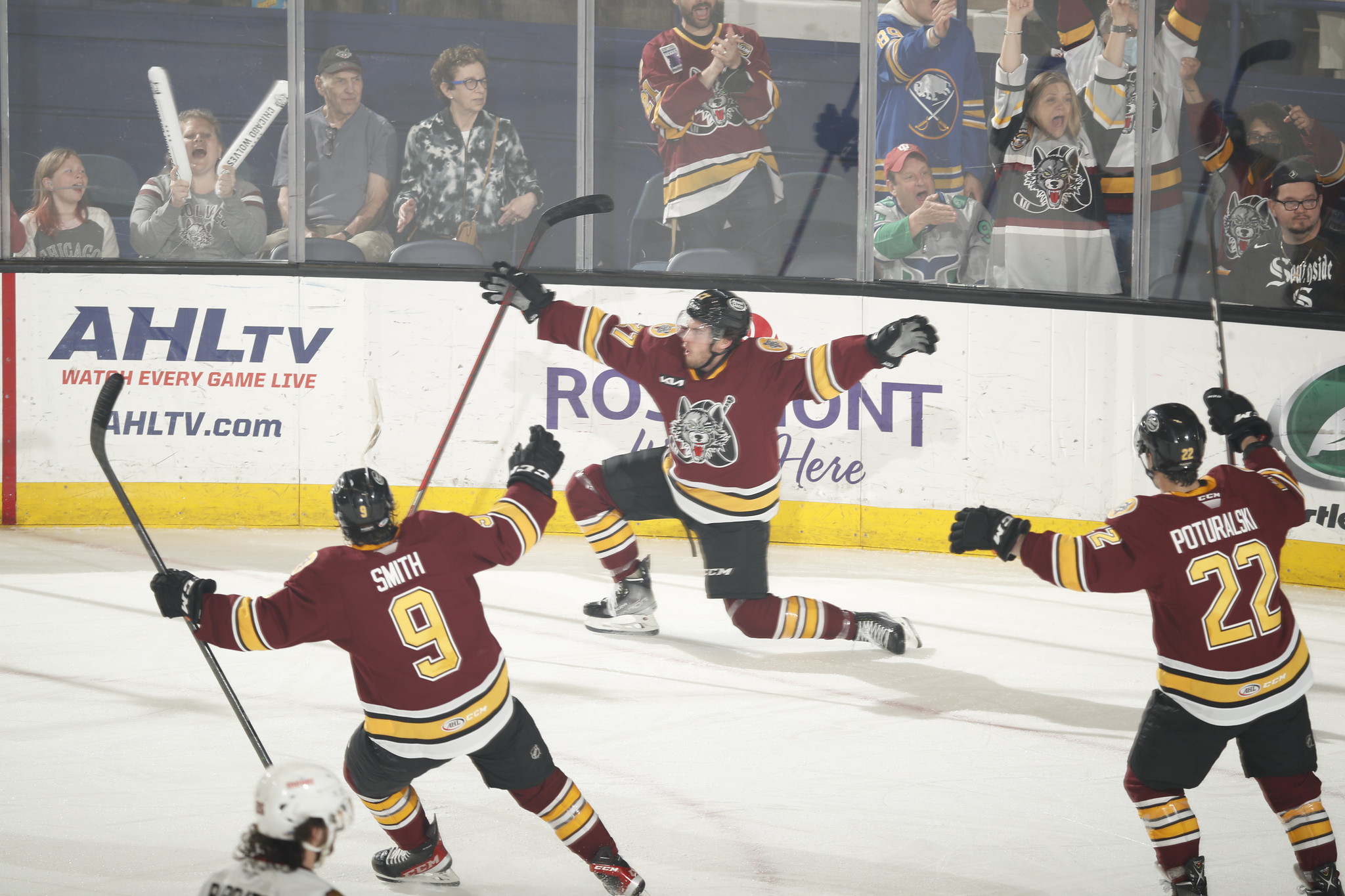 ROSEMONT, Ill. – Twelve days after their last game action – conveniently against the same opponent – the Chicago Wolves finally took the ice in the Calder Cup Playoffs. Their opponent would be a Rockford IceHogs team that quite frankly had their number all season, sporting an 8-3-0-1 record over the #1 team in the AHL. Following their victory over the Texas Stars, the IceHogs were coming into Allstate Arena with confidence, especially considering their 5-0-0-1 record against Chicago on the road.

This Central Division Semifinal had the makings of a trap for the Chicago Wolves, but in the postseason, you throw all of those records away and start 0-0. There was also concern that there may be some rust getting back up to game speed after nearly two weeks off.

It didn’t take long to put these concerns to bed, as the Wolves would skate out of Game 1 with a convincing 6-2 victory over Rockford to take a 1-0 lead in this best-of-five series.

The opening period of this one followed the script of most of the regular season games. Early on, the Wolves established a pressing forecheck, getting after pucks and forcing Rockford to make mistakes in exiting the zone. This resulted in several chances, but initially, the Wolves couldn’t solve Arvid Soderblom in net. In classic Rockford fashion, despite being outshot 9-1, they would strike first on the counter attack. Lukas Reichel forced a turnover at his own blueline and went in all alone on Alex Lyon, beating the Wolves netminder with a shot through the five-hole to give the IceHogs the 1-0 lead.

Again, the Wolves put chances on net against Soderblom but failed to crack through the armor for 19 minutes. It wasn’t until the last minute of the period that David Gust got the puck underneath the goal line and got a pass out to Cavan Fitzgerald, who hammered a one-timer through traffic that beat Soderblom and tied the game up. You could just feel the relief on the Chicago bench to get into the next period knotted up.

Chicago, however, wasn’t done yet. Just 15 seconds later, Josiah Slavin took Rockford’s fourth minor of the period, and with the clock winding down, the Wolves finally cashed in on the man advantage. Stefan Noesen, the AHL’s leading goal scorer in the regular season, got the puck at the side of the net and, with a power move, was able to tuck it past Soderblom with just ten seconds left on the clock to push the Wolves to a 2-1 lead.

The energy in Allstate Arena gave the impression that this Wolves team wasn’t following the regular season script.

The second frame began with the Wolves immediately applying more pressure, continuing with their 18-6 advantage in shots from the previous period. That pressure created a turnover on the forecheck, and Jamieson Rees found a wide-open Stelio Mattheos in the slot, who wristed a laser beam past Soderblom to extend the lead to 3-1 just under 4 minutes into the period.

With Alec Regula sitting in the box for a cross check, the Wolves PP went back to work. The dependable PP quarterback for Chicago all season, Joey Keane, got a shot through traffic that Jack Drury redirected out front. Soderblom had no chance on the tip, and just like that, it was 4-1 Wolves.

The onslaught continued at 13:47 of the period, when a successful kill of a Gust minor was followed by the puck finding Gust just getting out of the box and left alone on a breakaway. While Soderblom stopped the first chance on the glove side, the puck bounced up in the air, and Gust swatted the puck out of the air to push the lead to 5-1 and blow this game wide open.

The first scrum of a playoff blowout gave Rockford a glorious chance on the powerplay when followed by Josh Leivo’s delay of game putting the puck over the glass. The Wolves, however, sold out for shot blocks and clogged the passing lanes, refusing to give the IceHogs any momentum to carry forward in this one. A second scrum broke out following a high hit in the corner by Mike Hardman at the buzzer, but mercifully for Rockford, the period was finally over, and they could regroup for the third.

Rockford decided to come out into this period with Cale Morris in net, and he would soon be introduced to Wolves playoff hockey as well. Thirty-six seconds into the period, Noesen collected the puck from his knees and shoveled it in far side past Morris to make this one a laugher at 6-1.

Stefan Noesen (@Chicago_Wolves) nets one from his knees for his 2nd goal of the night in #CHIvsRFD. pic.twitter.com/UfqIO3ndpp

Rockford wouldn’t go away quietly – at 7:21, Evan Barratt was left all alone in the slot and beat Lyon to pull the IceHogs within four goals. A couple of minutes later, Ryan Stanton took Drury into the boards with the puck nowhere near him and was given two minutes for the heavy hit. Drury was slow to get up but remained in the game, even getting back in on the resulting powerplay. The rough stuff continued with Kurtis Gabriel dropping his gloves and going after Fitzgerald in the corner, but the Wolves’ defenseman skated away with little to gain from engaging Gabriel. The Rockford enforcer was given a 10-minute unsportsmanlike conduct penalty, and with just 6:31 left in the game, his night was done – the referees refusing to let a game already decided get out of their control.

For Rockford, it was far too little, far too late – the IceHogs didn’t manage to test Lyon much the rest of the period, and the final horn blared to a chorus of cheering Wolves fans at Allstate Arena as their team closed out the 6-2 victory.

Game 2 between these two teams takes place Saturday at Allstate Arena at 7 PM CST. Game 3 turns the series down I-90 back to Rockford on Sunday at 4 PM CST.