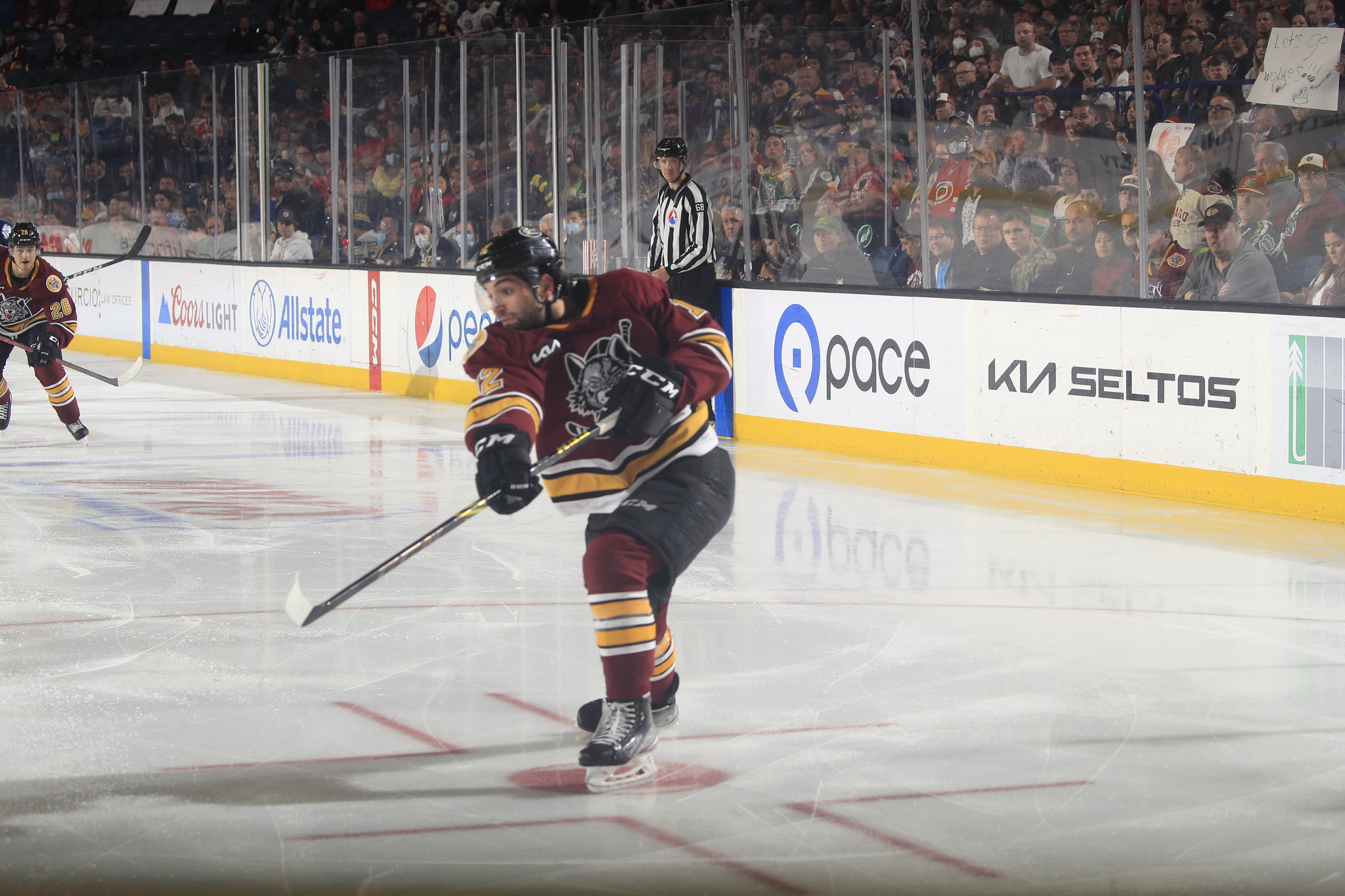 ROSEMONT, Ill. – Two teams remain standing in the Central Division, and those teams came together on Saturday night in Allstate Arena for Game 1 of the Calder Cup Division Finals. The Chicago Wolves found themselves lining up against the #3 seed Milwaukee Admirals following their upset of the Manitoba Moose in the previous round – an opponent that they’ve come to be quite familiar with. Saturday’s game began the seventh series between these two teams, marking the most times the Wolves have seen one opponent in the postseason in the history of their franchise.

While Chicago held the regular-season series record over the Admirals, when the postseason begins those records dial back to 0-0. The Admirals would surely come looking for a battle against a team they’ve battled against all season, and the Wolves knew the challenge ahead of them in order to advance further in the Calder Cup Playoff.

When the smoke cleared on Saturday, Chicago would be leading the series following a 6-2 win over Milwaukee in Game 1.

Chicago wasted no time getting on the board in this one. A quick out of the zone pass got the puck to Jack Drury on a 2-on-1 rush up the ice against Admirals goalie Connor Ingram, and Drury wired a laser beam over Ingram’s glove just 32 seconds in to put the Wolves ahead.

While the early goal seemed to indicate the Wolves taking advantage of this one, it was the Admirals that had the puck early and often. The Wolves weren’t normally seen on their heels so heavily in the first but Milwaukee pressed the attack, put pucks on the net, and physically went after the Wolves.

“They started fast.” Wolves head coach Ryan Warsofsky said of the Admirals. “Their pace was up. We were probably a step behind them. We had to get back to our game after the first, we had to get our pace going and back to our identity. We were just slow to start.”

Despite the 13-5 shot discrepancy, the Wolves held on to their 1-0 lead thanks to the play of star goaltender Alex Lyon, who made several big saves in that first to hold on to the lead. Perhaps his most impressive came with the two powerplays the Admirals had in the first and weren’t able to cash in.

“As a goalie, I love D-zone coverage.” Lyon said of the extra work. “I don’t mind when they start whipping it around, that gets me into the game, gets me engaged, gets me comfortable. The Wolves are typically a team where we might get 15-20 shots a game. To have that in my life is actually kind of refreshing.”

That 1-0 lead would hold against Milwaukee pressure into the intermission but was far from one of the better periods that the Wolves had played this year.

This time, it was Milwaukee striking early. Behind the strong forecheck of Juuso Parssinen and Joseph LaBate, Cole Schneider was able to get the puck in the slot and roof a shot past Lyon to tie the game up just 1:30 into the period.

It took nearly half the period for one of these teams to break away, but the Wolves found the advantage on a long line change on it was Josh Leivo entering the zone with a lane. Leivo fired a slap shot on the rush that blew past Ingram, off the bar and in for the 2-1 lead 9:30 into the period.

As they had done all season long, the Wolves would continue to attack through stretch passes through the neutral zone finding their speedy forwards. This time Vasili Ponomarev threaded a slick pass through to Jamieson Rees all alone on Ingram, and his patience on the backhand was able to extend the Wolves’ lead to 3-1.

Both teams continued to press with the clock winding down, looking for any advantage before the period ended. With just five seconds on the clock, CJ Smith fed Chicago captain Andrew Poturalski at the Milwaukee blue line. Poturalski threw a last-second shot on net that went off Ingram’s glove and bounced into the net with just a second left on the clock. It was a backbreaker for an Admirals squad that fought so hard against this talented Wolves team that skated into the intermission with a 4-1 lead.

The last-second goal would mean the end of the night for Ingram – Devin Cooley stepped into the crease to start the third period for the Admirals. The goalie change seemed to spark some life for the Admirals to shake some attitudes up in their attack. On the powerplay, Brayden Burke found the seam through traffic to Jimmy Huntington on the far side, who wired a one timer upstairs to beat Lyon and bring the Admirals within two just 2:30 into this period.

However, the Wolves wouldn’t be willing to give any momentum away. Rees hit Stelio Mattheos streaking into the Milwaukee zone on an odd-man rush, and Mattheos would label a rising shot for the top corner over Cooley’s glove to restore the three-goal lead at 5-2 just over 30 seconds after Huntington’s powerplay goal.

“Really good.” Warsofsky said of his fourth line. “Gave us some energy. Really important that Reeser gets going and Mattheos and Pono kind of solidifying that role. They were really good. Their last few practices were probably their top practices of their careers. When you practice better it translates to a game that’s habit-based. It started on Wednesday and it translated to the game tonight. “

Milwaukee responded with desperation. Big bodies like LaBate and Mitch McLain crashed at the net to dig pucks through Lyon’s pads but the Wolves’ goaltender made a couple of excellent stops off a turnover in the zone. The goaltender had excellent vision to see the pucks through the traffic of heavy bodies in front and was able to stay focused on the puck and keep it out when they converged on the crease.

“I love the physical play.” Lyon said of the big bodies coming at his crease. “That’s kind of the style I played in pro before I came to the Wolves. It doesn’t bother me too much. It makes for a fun game.”

With four minutes remaining, the Admirals pulled Cooley for the extra man, but they never really got any good looks at the net. With 3:20 to play, Drury got the puck from Max Lajoie at center ice and deposited it into the empty net to push the lead to 6-2, which would stay until the final buzzer of Game 1 ending in a Wolves’ victory.

“Got to play better, got to play faster, got to play harder.” Warsofsky said for Game 2. “All the terms that a hockey coach uses at the end of a game usually when you lose. We’ll take the win. Just wasn’t good enough at times, it needs to be more consistent. This is a deadly team over there.”

Game 2 is at Allstate Arena Sunday at 3 PM CST before the series turns up I-94 to Milwaukee for Game 3 on Wednesday at 7 PM CST.