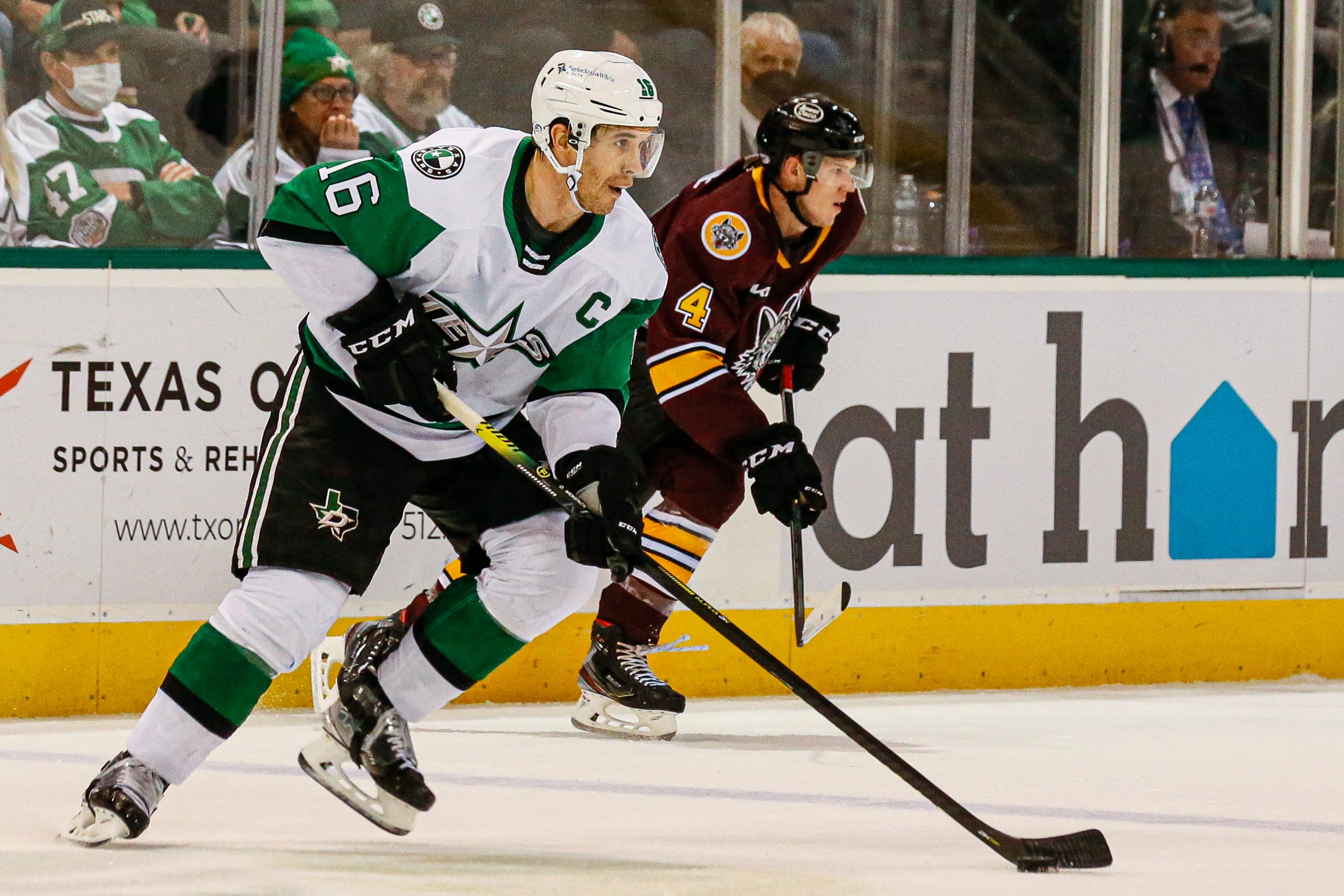 CEDAR PARK, Texas. – The Chicago Wolves squared off with the Texas Stars on Saturday night just two days after their first meeting this season, an 8-4 decision that went to the Wolves. Chicago was expecting to see NHL veteran Ben Bishop at least once more this weekend in accordance with his injury rehab, but the announcement from the Stars on Saturday morning quelled those rumors. Bishop, instead, would be recalled to Dallas, where he’d remain on Long Term Injured Reserve for the remainder of the season before officially announcing his retirement at season’s end.

Instead, Adam Scheel would get the start for the Stars, while Alex Lyon would tend Chicago’s net in the midst of an incredible goalless run following back-to-back shutouts against the Iowa Wild last week.

The two teams played with incredible pace, vividly on display with twelve goals on Thursday with a brilliant followup performance on Saturday that saw the Wolves grab their 8th win in a row with a 4-3 effort that took overtime to decide.

Early on, the chances were already flying off the rush, with almost an identical look to Thursday’s game without the first-minute goal. Wide shots and quality goaltending helped hold the 0-0 score until Riley Damiani went off for tripping 4:39 in, opening the door for Andrew Poturalski to score a mirror image goal from Thursday night from the high slot.

Just like Thursday, the Stars would respond with Ty Dellandrea collecting the rebound from a Jordan Kawaguchi shot and putting it behind Lyon to tie the game at one.

Despite the fast pace, the defensive sticks started to tighten up and refused to allow so much open ice as was seen the previous night. Where the Wolves had free reign in the Stars’ zone on Thursday, there was much more push back from Texas to play the body and not give the easy chances on net. There was certainly a focus over the break to help out their goaltenders more and the Stars responded well.

The Stars brought their momentum from the end of the first into the opening minutes of the second. They utilized a heavy, physical presence in all zones to separate Wolves from pucks and turn around in transition to offensive chances. The Wolves, however, wouldn’t allow themselves to get beaten back and Stefan Noesen would chip a backhand past Scheel to retake the lead for the Wolves at 5:12 of the period. Noesen received a beautiful pass from Jesper Sellgren to find him all alone at the side of the net, and the noted Wolves grinder made his presence felt on the boards and now on the scoresheet.

Again – the Stars would respond just as quickly as they did on Thursday. Anthony Louis, who had been flying around the ice all night for the Stars, found Damiani for a one-timer that beat Lyon to tie the score at two. Louis was extremely active on both sides of the puck, breaking up Wolves’ chances with an active stick while his tenacity on offense kept the Wolves on their heels for much of the night that had carried over from his great game on Thursday.

As prominent as the Wolves have been offensively this season – third in goal scoring in the entire AHL and putting high volumes of shots on net to go with it – the Stars were right there with them in this game. Where the Wolves like to dominate puck possession, they found themselves outshot and outplayed by the Stars in that second period. After forty minutes, the two teams were knotted up in score at 2-2 and shots with 20 apiece, setting up a tightly contested final frame.

Early in the period, the Wolves got a couple of powerplay opportunities to step ahead and take the lead. Despite their gaudy offensive talent, the Wolves were unable to break through the Stars’ penalty killers effectively, and when they did Scheel was there to make the big saves to keep this game tied. A miscue from the Stars, however, gave the Wolves the break they needed to allow CJ Smith to score his fourth goal of the week against Texas and put Chicago up 3-2 with nine minutes to play.

With tight checking and a tight score came some rough play. Josh Leivo crashing the net was met by Jerad Rosburg, and both were given roughing minors for their post-whistle scrum. The rough play carried into the next shift where Stars defenseman Thomas Harley threw some heavy body checks in an effort to impose their will in the physical battles. Normally known for his smooth skating and play-making, seeing Harley out there throwing his weight around must have inspired the Stars bench, and their skates had an extra step in them as the third wound down.

Chicago nearly came up with a big insurance goal on a Poturalski wrap-around attempt, but the referees waved the score off due to goaltender interference. With the tension ramping up into the end of the period, Wolves defenseman Cavan Fitzgerald took an interference minor to give Texas a huge chance to tie this one up. With two and a half minutes left it was former Wolf Curtis McKenzie tapping in a feed from Dellandrea to tie the game at three. McKenzie, playing in his 500th career professional game, was mobbed by his teammates, and the emotion on his face vividly on display with such a big goal and a big milestone for him.

That equalizing goal would send these two teams into overtime with a huge point on the line.

Three-on-three hockey is all about a key facet of the game: puck possession. The Wolves held the puck almost exclusively through the opening minutes of overtime, and though the Stars bent they didn’t break in front of Scheel. That shield held for 3:20, where Poturalski found Noesen for his second of the night and a 4-3 final to extend Chicago’s winning streak to eight games.

The @Chicago_Wolves get their 8th straight win with a shot from Stefan Noesen in OT! pic.twitter.com/04zfLMY1Zg

Lyon finished with 27 saves, while Scheel stopped 29 of 33 attempts.