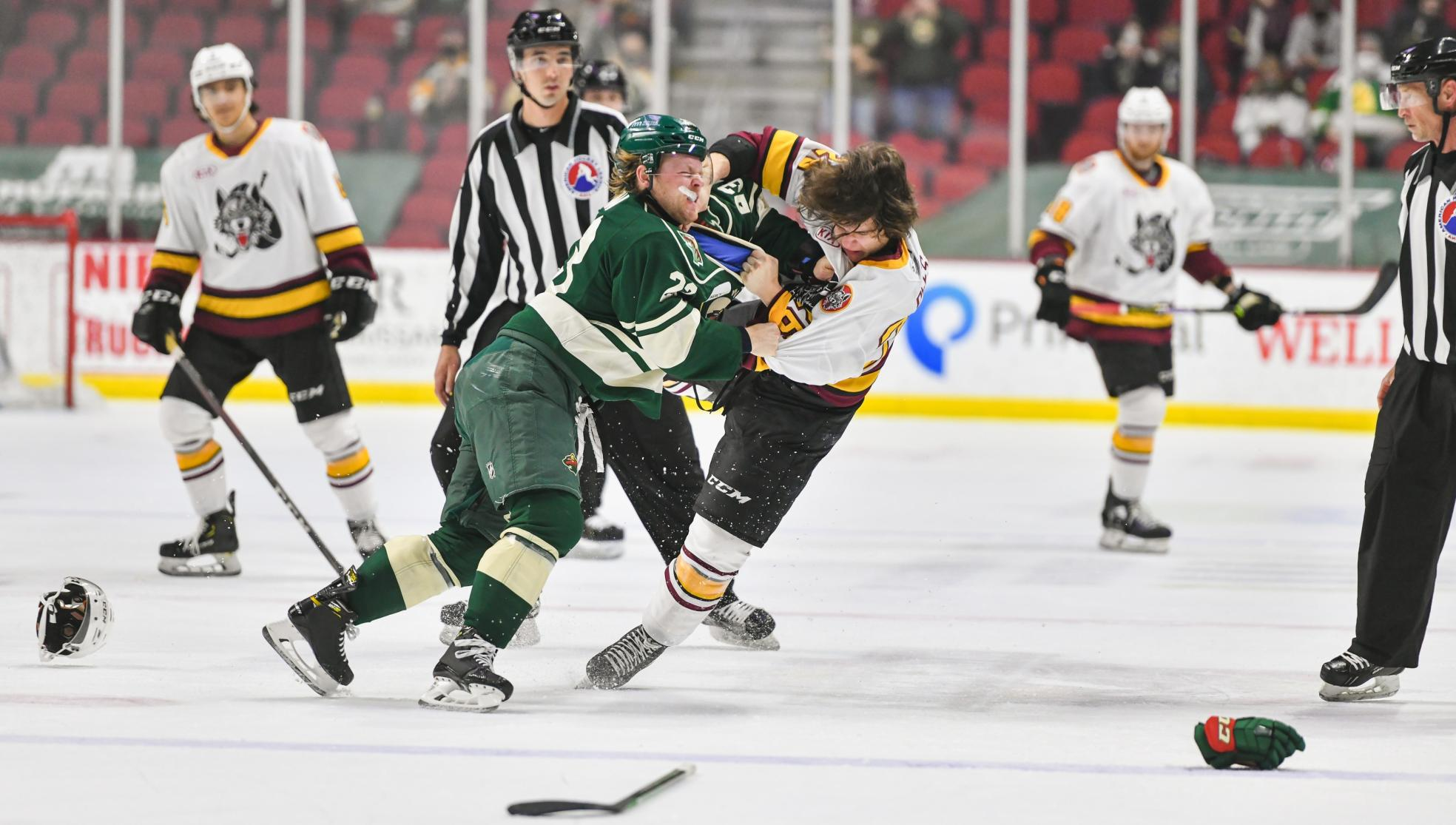 DES MOINES, Iowa – The Chicago Wolves rode the bus down I-80 this weekend with a healthy confidence considering their success against the Iowa Wild this season. In their four previous matchups this season, the Wolves have dominated the Wild up and down the score sheet, winning all four games and scoring 24 times in the process while only yielding five Iowa goals. The discrepancies between the two clubs were even more apparent on special teams, where the Wolves went 8-for-19 on the man advantage while holding the Wild to zero powerplay goals (and even scoring a couple shorthanded).

Following Thursday’s loss to Rockford that saw their six-game winning streak snapped, the Wolves skated into Des Moines hoping for a new streak to begin in what could almost be a second home for them: Chicago holds a 24-6-3-1 record over the Wild on the road.

Iowa, however, had other plans and saw early that this series would be much different than the earlier games between these clubs.

Just before puck drop, Chicago announced that leading team scorer Tanner Jeannot would be out of the lineup for the weekend’s series. With an eight-game goal streak and a 12-game point streak, not to mention all of the intangibles that Jeannot brings night in and night out, his absence in the lineup could not be understated.

Connor Ingram made his debut for the Wolves, tying a franchise record as the sixth goalie to make an appearance for Chicago this season. His first Wolves game would start off rocky as Keaton Thompson blasted a point shot past the screened Ingram just a minute into the game for an early Wild lead.

Iowa established their forecheck early in this game, disrupting Chicago’s play in their own zone and neutralizing the effectiveness of their breakouts. The long stretch passes out of the zone that the Wolves use to spring their speedy and talented forwards just weren’t there early on, and this game had the makings of a physical battle early on as a result.

The physical play turned into pushing and shoving after the whistles, and the Wolves and Wild were right on script with their usual affairs; these two teams averaged fifty penalty minutes per game and are two of the most penalized teams in the league. The calls hurt the Wolves badly here, as Connor Dewar scored the first powerplay goal the Wolves had given up against the Wild all season, and was followed up by a second as Matthew Boldy scored on the man advantage in his professional debut. Meanwhile, the Wolves’ powerplay that was so effective against Iowa all season came up 0-for-7 on the man advantage.

Before Chicago could catch their breath, it was 3-0 heading into the first period.

The physical play refused to yield, and a conversation between Jamieson Rees and Mason Shaw would turn into fisticuffs.

With Iowa all over them physically, the Wolves struggled to find a rhythm. Sloppy play in their own zone, stick infractions, and a case of a goalie playing the puck in the restricted area handicapped their offense all night. Whenever they did click, Dereck Baribeau was there to make the save, stopping 24 of 25 on the night and only beaten by a David Cotton rebound chance.

Calen Addison would add one more for Iowa before the end of the second, beating Ingram through the five-hole. Ingram finished with 32 saves on 36 shots.

The third period saw the Wild clamp down on any comeback effort from Chicago, and the frustrations were apparent in the Wolves lineup. In a battle in front of Baribeau with Turner Ottenbreit, Sheldon Rempal turned and delivered a hard cross-check high to the Wild defender, drawing a response from renowned Wild enforcer Cody McLeod. Rempal declined the invite to drop the gloves with a veteran that had collected over 1,600 penalty minutes in the NHL, but that didn’t stop Sean Malone from mixing it up with Addison and both players receiving 10-minute misconducts. The game saw an unceremonious end as Phil Tomasino slashed a Wild player in frustration and watch for the final few seconds of a 4-1 defeat at the hands of the Wild – the first kind Chicago had seen all season that saw perhaps their worst sixty-minute effort of the season.

They had 18 hours to respond.

While Iowa stuck with Baribeau in net, the Wolves turned to veteran Antoine Bibeau for Saturday’s game. Early on in the first period and the Wolves looked to be getting their groove back that was lost on Friday, transitioning well from defense to offense and finding room for quality chances against Baribeau. It was the Wild that struck first, however, as Will Bitten capitalized on a turnover in the Wolves’ end to make it 1-0 in favor of the home team. Bitten’s goal marked the sixth straight game that Chicago has given up the first goal. The very next shift, Jamieson Rees looked to spark the Wolves with a hard hit on Addison behind Baribeau, and Keaton Thompson took exception to the hit.

The bad blood continued into the first as Anthony Richard took down Addison along the wall, bringing together another scrum that saw Rees and Thompson exchange pleasantries again that saw 10-minute misconducts for them both. With an average of 50 penalty minutes per game, Iowa and Chicago combined for 36 in the first frame alone on this one.

A minute into the second and Joakim Ryan and Gerry Mayhew get into it in front of Bibeau. Ryan was given two minutes and the Wild cashed in on a Damien Giroux powerplay goal and a 2-0 lead for Iowa. Early on into the period, it began to feel like Friday’s game was rolling over into Saturday’s.

The Wolves countered, however, and following a series of strong shifts in the Wild zone it was Richard on the breakaway to put the Wolves on the board and halve the lead at 2-1. Rees, who had sprung Richard earlier, nearly scored on the next shift with a power move across the crease but draws a call and it was Phil Tomasino tying it on the powerplay not even a minute after Richard’s goal.

Tomasino saw himself mixing it up with Ryan O’Rourke after the Wild defenseman slapped the puck away from him following a whistle, with the Wolves teenager responding with a slash and the two exchanging pleasantries with gloves on. Both players received two for roughing and 10-minute misconducts with an extra two minutes for Tomasino. Continuing the theme with the weekend, there was no love lost between these two teams.

Into a bit of a calmer third period, Dominik Bokk powered a shot through Baribeau under his arm on the short side to give the Wolves their first lead of the weekend. Later in the period, a tripping penalty on Luke Evangelista nearly turned into a Matt Boldy powerplay goal, but the combined effort of Max Lajoie and Bibeau kept the puck out somehow, and going the other way Sheldon Rempal scored shorthanded from a tight angle to give the Wolves a 4-2 lead. Rempal’s marker was the third shorthanded goal against the Wild this season.

Down 4-2, the Wild wouldn’t lie down on this one with continued chances and pressure on Bibeau into the last two minutes. A David Cotton tripping penalty led to Matthew Boldy’s second powerplay goal in as many games this weekend, cutting it to a 4-3 Chicago lead. With Baribeau on the bench and just forty seconds later Mitchell Chaffee deflected a Calen Addison shot to tie the game up in the waning seconds of this game.

With 30 seconds left, Giroux tripped Phil Tomasino to put the Wolves back on the powerplay, but overtime was needed to decide Saturday’s game. The penalty to Giroux had just expired when Jamieson Rees dragged the puck to the inside, fired a shot off Baribeau’s pad and Sean Malone was there to put it away on the rebound and cap off an incredible battle of a weekend with a 5-4 Wolves win in overtime.

When you win in overtime, the @ImpactMyBiz Play of the Game becomes obvious.

Frederic Allard finished with three primary assists on the evening. Jamieson Rees had two helpers of his own. Bibeau made 35 saves in the victory across from Baribeau’s 31.

Tuesday’s game in Grand Rapids was postponed due to COVID-19 concerns, and as such the Wolves don’t play until Thursday night at 6 P.M. CST. Chicago is 4-1 against their Central Division rival this season.

The Wolves follow that game up with a home and home against the Rockford IceHogs before traveling out to Ohio to take on the Monsters for a weekend series beginning April 23rd, looking for a bit of payback for their earlier losses to Cleveland this season.