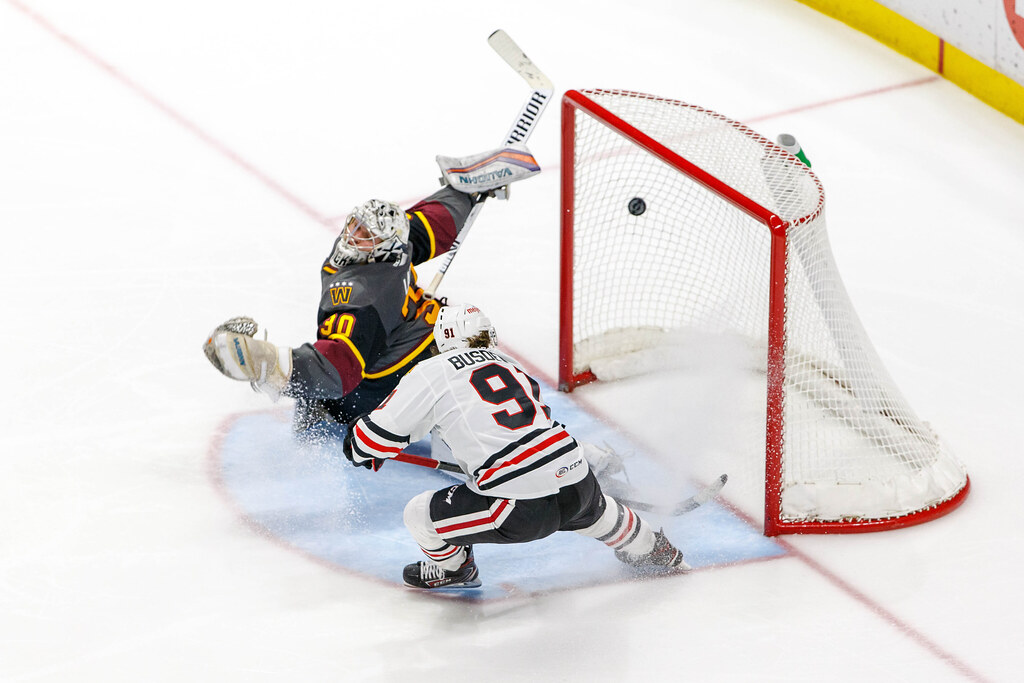 The Chicago Wolves owned a twelve-game win streak heading into Friday’s game in Rockford. However, it was the home team that looked like the class of the Central Division

ROCKFORD, Ill. – The Chicago Wolves owned a twelve-game win streak heading into Friday’s game in Rockford. However, it was the home team that looked like the class of the Central Division.

In the return to action for both teams, the IceHogs (12-11-1-1) unceremoniously snapped Chicago’s run of consecutive victories. Rockford posted an 8-0 blowout of the Wolves at the BMO Harris Bank Center.

Five tallies in the second period paved the way for the Hogs, who were led by rookie Lukas Reichel‘s four-point night. Reichel posted two goals and assisted on two more. His first-period strike proved more than enough for Rockford goalie Collin Delia, who set aside all 30 shots the Wolves sent his way.

Reichel sniped the game-winner 5:49 into the contest, besting Wolves goalie Michael Lackey. He then set up Andrei Altybarmakian in the slot for a 2-0 advantage early in the second.

Chicago had a golden chance to get back into the contest with Chad Yetman in the box for slashing. On the ensuing power play, Andrew Poturalski sent a pass to Josh Leivo at the left dot. With a wide-open net ahead of him, Leivo’s shot was off the mark, glancing off the right post.

Following that, it was all IceHogs.

Rockford slammed the door on the Wolves with five second-period goals, adding a pair in the final frame to seal Chicago’s fate. Lackey was burned for all eight IceHogs goals on 35 Rockford shots.

Lackey and Caydon Edwards had both been signed to PTOs earlier that day after Alex Lyon was recalled to Carolina. Injuries to Eetu Makiniemi and Beck Warm put Lackey in net for Chicago, with Rockford capitalizing all evening.

The Hogs hadn’t been as prolific on the scoreboard since an 8-3 win over Iowa on February 8, 2014. Potting their first goals of the season in the rout were Yetman, Altybarmakian, Cameron Morrison, and Michal Teply. All four players added assists for multi-point games.

Before the contest, all-time IceHogs scoring leader Brandon Pirri was signed to a PTO. Pirri got in on the fun with an assist on D.J. Busdeker‘s third-period goal. Rockford also got a lamp-lighter from Jakub Pour, breaking his fifteen-game scoreless streak.

The Wolves (20-5-1-1) are still on top of the Central Division standings by a wide margin. However, Rockford dominated the ice, completely neutralizing the powerful Chicago attack. Delia made the stops and sent most of the Wolves’ attempts to the corners. The IceHogs also did a marvelous job clearing the front of Delia’s net on the few rebounds that wound up there.

The Wolves have two home games against Iowa and Cleveland to finish the weekend. Rockford will now attempt to sweep the weekend, traveling to Milwaukee Saturday.