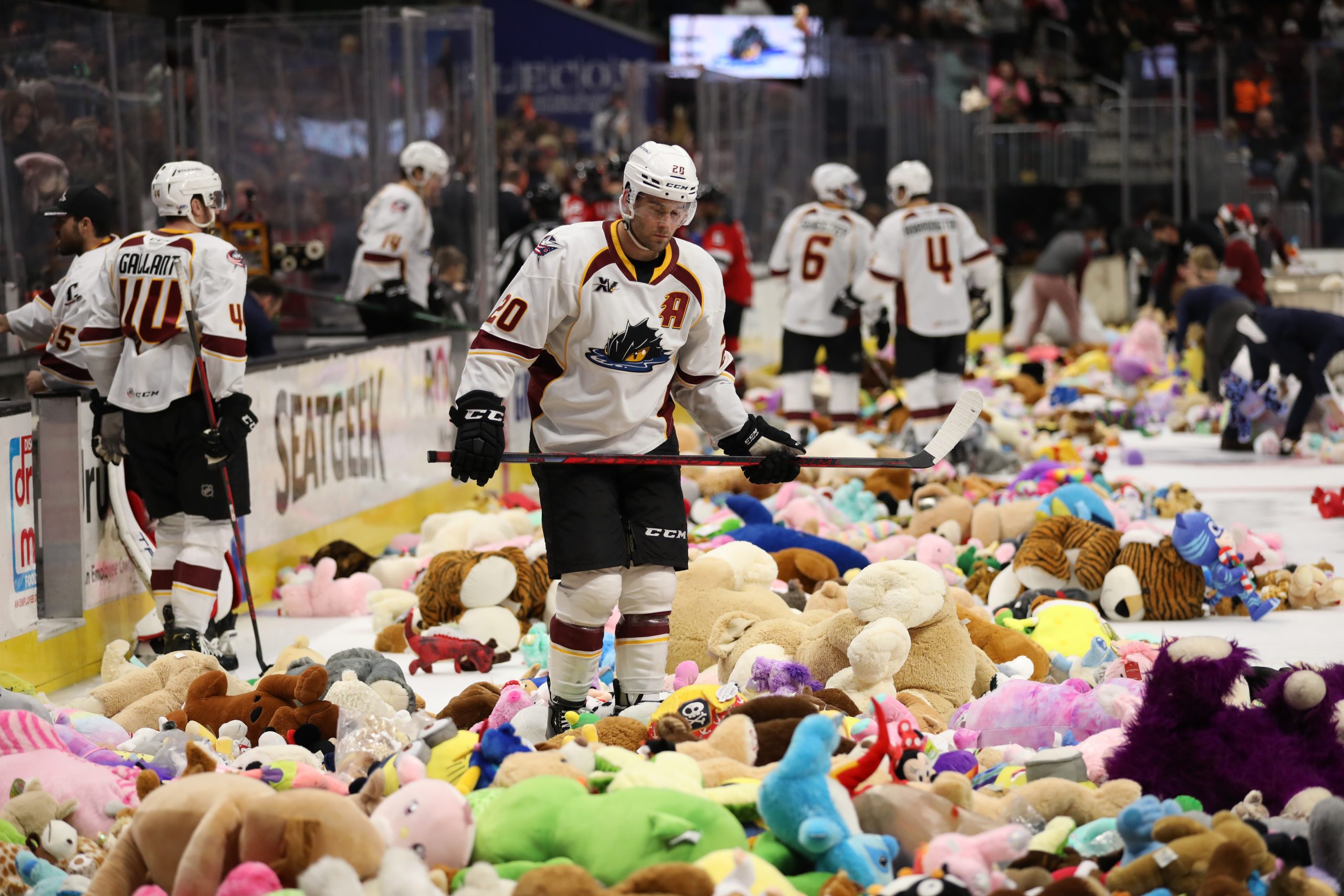 After it was all said and done, the total bear count was 10,168 a new record for the Monsters’ teddy bear toss

CLEVELAND – After a postponement of the Thursday night game between the Utica Comets and Cleveland Monsters due to COVID issues affecting the Comets, the two teams were able to play Friday. Cleveland would have a tough task in front of them, they had to get a goal within the first 40 minutes for teddy bears to go flying on Chuck a bear night.

A tall task because the Comets entered the contest averaging 1.9 goals-against per game, best in the league. However, something that gave Cleveland a slight advantage was the fact that Utica didn’t get into town till nearly 2 am and they dressed only 16 skaters. Could Cleveland gets a goal and get bears on the ice during the first two periods? Or, did the Comets play Grinch and steal the fun away?

Cleveland came out firing on all cylinders as they were determined to get a goal to send the bears flying.  For the Monsters, it was one of the best starts they had to a game all year. Sadly, after a four on four midway through the period, the energy for Cleveland fizzled away.

Utica got a 70-second powerplay after Christopher Lijdsman was released from the box. Despite, the Comets not scoring during the power play, they used it to swing the momentum in their direction. The power-play seemed to make Utica play their style of hockey after they played Cleveland’s style to start the game.

The first period would come to a close, rather uneventfully as neither team was able to produce many good looks during the first. However, tension among the fans and bears was growing as the Monsters would only have one more period to score. If the Monsters could not find the back of the net in the second, the bears would be chucked at the second intermission. 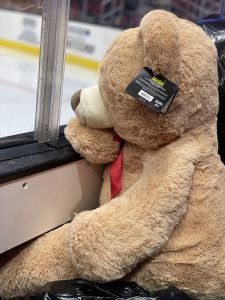 A teddy bear waits to be tossed over the glass. Photo Courtesy: Courtney Jones

You would expect that after the intermission for Cleveland to come out swinging. The Monsters knew that time was of the essence, as the bears were patiently waiting to be tossed after the first goal. I think everyone in the building would have been a little sad if the bears would have had to get tossed during the second intermission.

The Comets were doing their best to play Grinch and steal the fun. Utica spent the large majority of the second blocking Cleveland’s shots and spending a ton of time in their offensive zone. As far as Cleveland goes, they had a grand total of three shots in the first 15 minutes of the period…not exactly the effort the hometown fans were looking for during such an important period of play.

Utica would strike first getting on the board at the 16:22 mark of the second period. After spending 90 seconds in their offensive zone and benefiting from the short change they had in the second they found the back of the net. Tyler Wotherspoon fired a shot off from the blue line with heavy traffic in front of the net, it was redirected by Ryan Schmelzer and past Daniil Tarasov. There was nothing more Tarasov could have done on the play, as there were four players directly in front of his crease.  Something clear on this play was how well Utica can move the puck around the zone. All their passes were tape to tape. With just 3:38 left to go before the intermission, this goal drained the crowd of any energy it had left.

Then, just 33 seconds later the Monsters sent the crowd into a bear-throwing frenzy. Dillon Simpson came streaking into the offensive zone with speed, he made a nice move to get around a Comet defenseman before backhanding the puck on the net. Utica’s goalie Mareks Mitens thought he covered the puck. However, in reality, it was lying next to the right leg pad, an alert Kevin Stenlund took notice and flipped the puck over Mitens leg to send the bears flying. For a moment it did look like the goal would be heading to a replay review, but the replay on the big screen left no doubt it was a good goal. After it was all said and done, the total bear count was 10,168 a new record for the Monsters’ teddy bear toss.

After two periods one thing was clear Tarasov was keeping Cleveland in the game. He made several point-blank stops, where there was no one between him and the Comet player.

Despite the game being knotted at one apiece, the third was rather uneventful up until the final two minutes. The teams traded chances multiple times, but Cleveland defiantly appeared to have the upper edge. Utica, it appeared, was feeling the effects of arriving in Cleveland at 2 am and playing two forwards short.

Cleveland would grab the lead with just 88 seconds remaining in regulation. The goal was thanks to a great setup by Trey Fix-Wolansky, who centered a pass to the trailer Brendan Gaunce, who fired a wrist shot from the slot to beat Mitens five-hole. For Trey, it was his ninth point in ten games since returning from injury. He continues to be a play maker and bring energy to this Cleveland club who badly needs it. It looked like the game was all but over. However, Utica had other things in mind.

The Comets with 60 seconds left pulled their goalie for the extra attacker and used their timeout to try and formulate a plan to tie the game. The plan worked and was executed perfectly. Wotherspoon was at the right point he passed to Chase De Leo who was below the left faceoff dot, immediately he passed the puck dangerously across the crease to Fabian Zetterlund who scored on a wide-open net. Again, it was the Comets crisp passing that led to the game tying goal.

With just 18 seconds remaining in the period, Stenlund took a slashing penalty to give Utica the man advantage. Utica didn’t convert in those 18 seconds but they would start the overtime period with 1:42 powerplay.

Utica scored exactly 60 seconds into overtime while on the powerplay to defeat the Monsters. Zetterlund was at the Utica goal line, he passed up to Reilly Walsh who was on the blue line. Walsh returned the passed to Zetterlund, who was still at the goal line and he scored top shelf to give the Comets a 3-2 victory.

As the story of the night goes for the Comets with their goals, crisp passing is what led to it. Almost all Comets passes are tape-to-tape. It is a thing of beauty to watch. Rarely, do passes not connect. It is not hard to see why they have only lost three times this year.

The Monsters’ continue their homestead on Wednesday night, as they host the Chicago Wolves for the first of two pre-Christmas games.